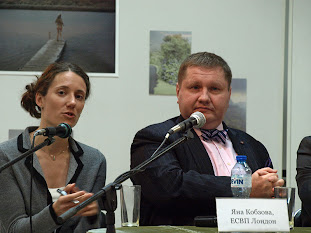 “Being powerful is like being a lady. If you have to tell people you are, you aren't.”  That was the Margaret Thatcher quote Russian journalist Konstantin von Eggert, a dear friend of ECFR, pitched in to describe Vladimir Putin’s predicament as he re-enters the Kremlin (has he ever left, one wonders). Sofia is not an easy place to hold a debate on Russia – local views are polarised. You either adore “Grandpa Ivan” or, in the case of a small but vocal minority, hate him with almost Baltic intensity. Yet the ECFR team which descended upon the Bulgarian capital did a great job to offer the crowd a nuanced, informed and intellectually stimulating overview of Russia where the once omnipotent Putin consensus is slowly eroding. We were truly fortunate to have the support of the Polish Institute in Sofia, a cozy venue for policy events bursting with fervor and energy.

Ben Judah spoke of restless, volatile days ahead where the regime’s putative authority will hinge on faces and appearances without substance (he spoke of “zombie politics” –  a phrase Dan Drezner would, no doubt, appreciate). And Jana Kobzova read the runes to infer what Putin 2.0 means for the EU, not least for small Bulgaria which is more or less wholly dependent on energy imports from Russia. To her, Russia is not as salient to policymakers in the Union compared to, say, 2008 when the Georgian war flared up. “Medvedism without Medvedev” might continue in foreign affairs. I hope this is the case and Vladimir Vladimirovich does not go on bashing the West to shore up dwindling support at home. The EU should implement the Third Energy Package, work with Russia on anti-corruption and refrain from directly 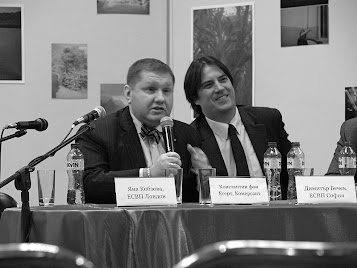 supporting the opposition marches (Eggert said, “this is an entirely Russian affair – the Party of Internet rearing its head and making inroads into a territory once controlled thanks to Putin’s outreach to the so-called “Party of TV”).  Needless to say, it is hard to do justice to as rich a discussion. One thing I took for home, as we paced down the Prince Alexandre Dondukov Blvd with Kostya Eggert and an assortment of Bulgarian journalists and bloggers, was that Russia of the “Late Putinism” that Ben Judah and Andy Wilson talk about is sure to force at least some of us in the EU’s “new member states” to look critically at ourselves. In our own neck of the woods, is the Party of the Internet really winning against paternalist leadership, clientele politics, the nostalgia for the strong hand and the ever present temptation to trample on or rewrite rules in order to govern uninhibited over a fragmented and mutually distrustful societies?