I am sometimes asked at my institute to interview prospective employees, to assess their level of English. It is usually a pretty depressing experience, as most of these young Chinese speak excellent English (certainly infinitely better than my Mandarin). After starting off with some getting to know you questions, I try to dig into something substantive that they are interested in. Recently I decided to ask them all what books they had read and liked in English.

The position that was being recruited for was an administrator's role, and those (mostly young women) interviewing for it were English language or literature graduates. When confronted with the question what book they liked most, Jane Austen scored the most, with Pride and Prejudice

and Sense and Sensibility most common (one girl had to whip out her ipad mid-interview to tell me the name of her favourite - “Sense and Sensibility”). William Faulkner’s short story A Rose for Emily did well, and a girl who had done French language and literature at University was a fan of Hugo’s Notres Dame de Paris (the Hunchback of Notre Dame in English). All pretty standard stuff and probably course texts chosen by nervous job interviewees who wanted to say the right thing.

A couple were a bit more revelatory – one girl who had done her dissertation at University on F. Scott Fitzgerald’s Great Gatsby said she liked the book because of the parallels she saw in the “American dream” and the new “Shanghai dream.” One of the few males said that he was a fan of Moby Dick because of the idea of an everlasting chase to beat the enemy, a situation he empathized with. But even these were tempered reactions, and I was very surprised to learn that the girl who had studied Fitzgerald had not read any other books by the author. A lack of inquisitiveness that is surprisingly common amongst some students I come across.

But then, at the end, a friend asked if I could interview her daughter as well, so she could practice her English. Sure thing, I said, and did the same questions I had before. This time, she launched off into telling me that Orwell was her favorite writer and in particular 1984

and Animal Farm. Why? Well, the book, she said, had a lot to teach us. In particular, she thought that it could show the Communist Party how it might try to improve itself and its image in the world. The lessons that could be learned from 1984 could help the Party show the world that Communism does not have to be that bad.

Now of course this girl did not have anything to lose in her interview and so was less inhibited. But it was an interesting perspective that highlights something I have touched on before - the patriotism that stirs within many young Chinese. Even a book which might be seen as damning for China (I recently re-read it while on a long car journey across China’s restive Xinjiang province and certainly saw some parallels) is seen by some of China’s youth as another opportunity for their great country to do better. They are fundamentally part of the system and proud of it, seeing a country before them in which 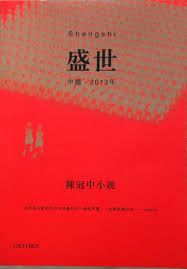 one can reasonably talk about an aspiration to a “Shanghai dream” being a reality. These are by no means cock-eyed optimists, but instead young people with outlooks that to me seem very similar to those of youth in the United States or Europe. Does this mean that the system as it is will simply continue into perpetuity? Not necessarily, as, in parallel to this growing desire to aspire, there is clearly a growing desire to reform – just at a Chinese pace, rather than something pushed from the outside. At least, let us hope it is going in this direction, as otherwise dystopian visions similar to 1984 or Brave New World that were painted in subversive best seller The Prosperous Time: China 2013 last year might come to pass.