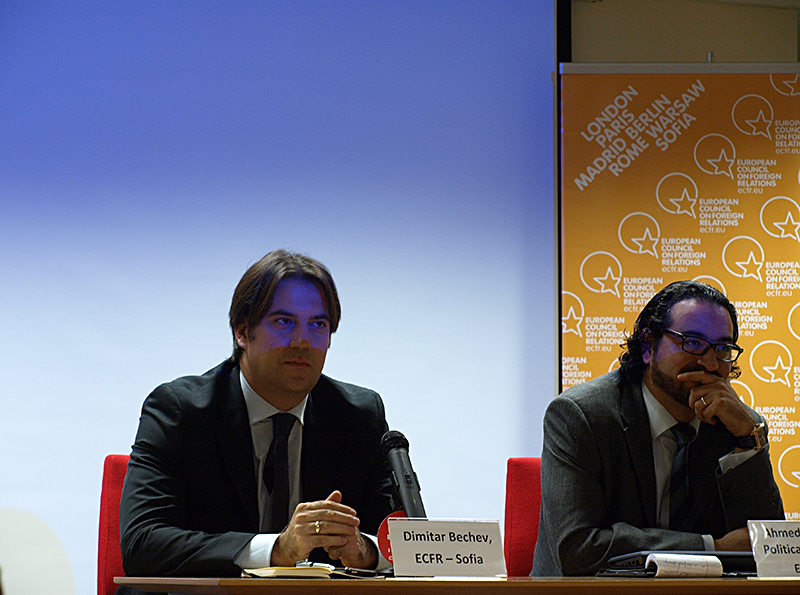 Bulgaria counts as an Eastern European country, but let’s not forget that it is closer to southern countries such as Greece, Turkey or Italy than it is to, say, the Baltics. Data from the 2011 census shows that 10% of the population is Muslim. Which is in all likelihood the highest share amongst current EU members (France comes second with roughly 9%).  Add to this the MFA-sponsored Sofia Platform, a forum to channel lessons from the post-communist transitions to the countries of the Arab Awakening, and you understand why ECFR’s acclaimed Power Audit of EU-North Africa relations should find a welcome reception in Bulgaria’s capital.
Yesterday, ECFR Sofia hosted one of the authors, Nick Witney, at the local branch of the Instituto Cervantes (muchisimas gracias to our friends at the Spanish Embassy and personally to Luis Canovas del Castillo Munoz for their amazing hospitality). A British speaker, Spanish venue, and Bulgarian organiser strikes as the perfect pan-European format that ECFR is partial too. This is in fact what the report itself argues: countries belonging to different camps and geographical groupings should team up and press forward with a more coherent and politics-focused approach if Europe is to make a positive difference from Egypt to Morocco.
We were really fortunate to have with us as a panelist Ahmed Naguib, once a youth leader from Tahrir Square and now prominent member of the Egyptian Current, an offshoot party of the Muslim Brotherhood, as well as co-founder of the Council of the Trustees of the Revolution. 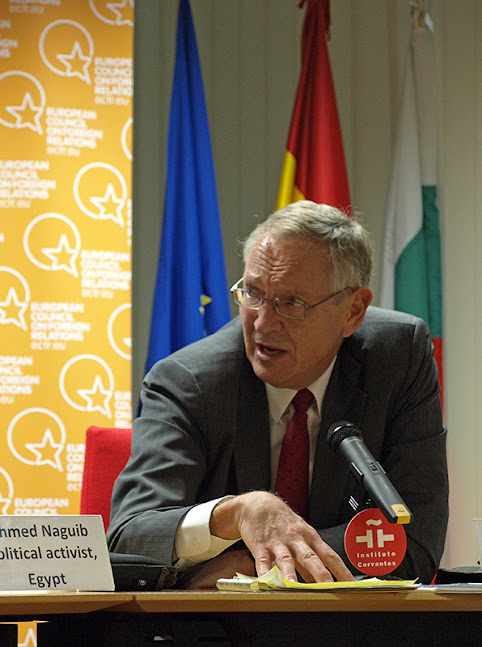 Ahmed thought that the EU is punching below its weight – a point which would hardly surprise many.  To him, to be credible the Union should take a harder stance to remaining autocratic rulers in places like Algeria (a tough sale given how central Algier is to any effort to tackle Mali).  He was sceptical whether conditionality (which never really worked in Egypt) could be re-energised now – under the more for more principle. Nick agreed. One of the key challenges to both of them is how new elites could deal with the remnants of the deep state in the army, security services, police and the judiciary (the panel took a critical yet somewhat sympathetic view of the Morsi’s recent decrees).
.It is precisely on security sector reform that both Ahmed and Nick thought post-communist countries such as Bulgaria could find a niche and offer some valuable “do’s and don’t’s” (sadly, more don’t’s in the Bulgarian case) to countries like Egypt. Capacity-building in political parties might be another area.  The event was a good opportunity to announce that the Tunisian School of Politics, a cross-party initiative supported by Bulgarian MFA is making good progress. And that the Tunisian President Moncef Marzouki, listed by Foreign Policy magazine as No 2 amongst 100 global thinkers for 2012, is to deliver a landmark lecture in Sofia on 12 December. North Africa has never been as close to us, even in the long-gone days of the Cold War when thousands of Bulgarian professionals made a career in Algeria, Libya, Tunisia, Egypt and elsewhere in the Middle East.
We might be coming a full circle. Ahmed Naguib reminded us that part of his family hails from the Ottoman town of Kavala, now in Northern Greece – an hour’s ride from the Bulgarian border. The Balkans-Turkey-Egypt connection is now rekindled in various ways, the integrative power of the EU and the transnational links instrumental for spreading democratic ideas and experiences being just two amongst many more.  Want to know more? Here’s a book you might find stimulating.
Dimitar Bechev is a Senior Policy Fellow and the Head of the ECFR Sofia office