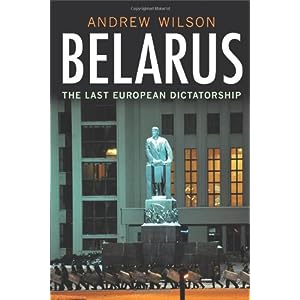 My interview with Andrew Wilson about his latest book, 'Belarus: the last European dictatorship', has just been published on the New Books Network. Here's the accompanying blog post and the link to the audio.

A couple of weeks ago I took a bus from Warsaw and travelled east across the River Bug. The border took a long time to cross, but then this was no ordinary border – it was the border between the Europe of the modern world, of the EU (with all of its problems) and liberal democracy, and the Europe of the Soviet era and authoritarian rulers. I crossed the border into Belarus.

Belarus has been getting a bad press since the middle of the last decade, when Condoleeza Rice famously labelled President Lukashenka ‘Europe’s last dictator’. Every so often news squeaks out about repression aimed at opposition figures, of currency devaluations and of curiosities like secret pipelines in stream beds that are used for smuggling vodka out into EU neighbours. This is clearly a country with some serious explaining to do.

Andrew Wilson‘s book, Belarus: The Last European Dictatorship (Yale University Press, 2011), is timely. Some are predicting that Lukashenka’s time is finally coming to an end, and eyes in Minsk and Brest are nervously following economic troubles within the EU and the fallout of Vladimir Putin’s comeback over in Moscow. The economy of Belarus is clearly feeling the strain – the $5 in roubles that I took out of a cash point paid for dinner and beers, with enough left over to visit the museum in the staggering Brest Fortress. It feels like some sort of change may be in the air.

Andrew’s book is very complete, starting with an entertaining run through of the country’s history, from Viking raids and werewolves through to the horrors of the Second World War and the fall of the USSR. At its heart are two questions: Is Belarus a real country? Why Lukashenka?

I might have been less keen to read a book on Belarus if I hadn’t just thoroughly enjoyed a visit there. But that would have been a mistake, and my loss. Andrew’s book deserves a wider audience, and Belarus deserves more interest from the outside world. I hope you enjoy the interview.